A cause close to my heart

May is Preeclampsia Awareness Month. I know there are so many causes out
there and you hear about all sorts of various conditions almost on a
daily basis any more, and now I am going to share mine with you.

Preeclampsia has affected my life in the most awful way it can. I have
had preeclampsia twice now and was just moments away from a third time.

My oldest (now 11 years old) was born 3 weeks early when I developed
preeclampsia. My blood pressure was being monitored throughout the
pregnancy as it was elevated from early on. Toward the end of the
pregnancy we began to notice a lot of swelling and I also began to spill
protein in my urine indicating that my kidneys were not functioning as
they should. The only “cure” to preeclampsia is to deliver the baby.
Riley was great and other than some jaundice issues, she had no other
problems from being born a bit early.

My pregnancy with Kelsi was an entirely different story. My blood
pressure began to rise around 16 weeks. We monitored it and I was told
that I was at a higher risk for developing it once again. I knew some of
the things to watch out for, things like headaches, vision changes,
swelling and higher blood pressure. At 22 weeks my blood pressure got
into the range of 150/100’s and I was started on a blood pressure
medication. Even with the meds it never really brought it down much. The
doctors continued to monitor me closely. I was totally naive though as I
had thought that when the doctors told me I might get preeclampsia
again, it would be toward the end of the pregnancy like it was with
Riley. I had no idea that I could get it at 23 weeks. But that is
exactly what happened. I was admitted to the hospital the day after
Christmas with a blood pressure of 170/110 and elevated liver enzymes
and a baby that was severely restricted in growth. Kelsi was born just 5
days later on December 30, 2004 weighing only 13oz and a tiny 8 1/2″
long. Our Sweet Kelsi lived just 2 1/2 short days and passed away in my
hands on January 1st, 2005.

Luckily I was blessed above all others and Kate was born only 4 weeks
early with no sign of preeclampsia at all. Truly a miracle, especially
when you consider what happened in my next pregnancy.

As you all know, my pregnancy with Kiari was anything but routine. She
was a surprise from the beginning. Now, most of you that  read this blog
know all about the transfusions and things we went through due to the
Rh Antibody. But what you  may not realize is that she was not born 2
1/2 months early due to the Rh Antibody issues. The morning I went in
for the 5th intrauterine transfusion my amniotic fluid levels were
dangerously low. Prior to that my blood pressure had risen. I had begun
spilling protein in my urine and my liver enzymes had begun to rise.
Preeclampsia was looming. The only thing that kept me from going into
preeclampsia this time was the fact that my doctor delivered my baby 10
weeks early. Had  he not done that, it is most sure that I would have
had a severe case of PE within days, if not hours.

The majority of the babies in the NICU during Kiari’s stay were born early due to preeclampsia.

I have met some of the most amazing women through the preeclampsia
foundation. While PE has been horrible in my life, it has also been a
source of goodness. It has made me realize what is really important in
life. It has allowed me to help others as they go through their journey
of grief and loss. But the one thing that I cannot do is give others
hope that it won’t happen to them. Pregnancy is not a joyful thing for
me. It is a very frightening and fearful thing for me. As much as I
would like to be delighted for others in their pregnancy, I fear for
them too. Even a healthy pregnancy can take a very dangerous turn in
just a matter of hours.

Because of all I have been through I have done what I can to help raise
awareness for the Preeclampsia foundation. I have made numerous pieces
of jewelry for them to action off at fundraisers. 2 years ago I was
honored as an artist when they asked me to design a piece that they
could present to survivors at their annual fundraising gala’s.

This year they have taken that design and transferred it
onto the shirts they are selling for a fundraiser and also using as
their shirts for their annual walk-a-thons.

A couple of weeks ago I had the opportunity to work in the studio of
another amazing artist. It was a fun day and I created a necklace for
myself. 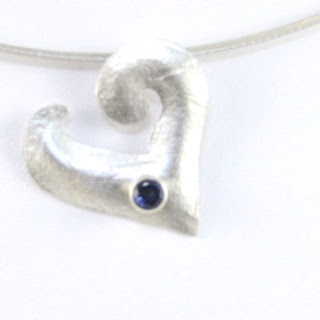 Everyone
has their causes that they believe in. This is my cause. Hopefully with
my story I will be able to help others that have gone through the loss
or experiences I have and they will know that they aren’t alone. If you
are able to help with a monetary donation, it really is a great cause to
donate to. The monies raised fund research and awareness programs so
that others might be aware of what to watch for so they won’t be like
me.

Both the pin and t-shirt posted above can be purchased through the Preeclampsia Foundation Marketplace.
The pin makes a great gift, just as a beautiful piece of art even if
the wearer doesn’t know the significance behind the piece.

Thank you for allowing me to share a cause that is very important in my
life. As I said May is the Preeclampsia Awareness Month. There are
numerous Walks being held throughout the United States. Please take a
moment to see if there is one by you. http://www.promisewalk.org/campaign

Preeclampsia: I AM A SURVIVOR!

One thought on “A Cause Close to My Heart”

Melissa Muir – Metalsmith; Where art and Jewelry Play Together

All the posts on my blog are original. Any opinions expressed are solely mine and are not influenced by advertisers or affiliate partnerships.  I do not accept paid reviews.

You may see banners, buttons or affiliate links from time to time and this is to help defray production costs, purchase tools and materials for review and ensure the site continues to grow and remain free for all to read. Most people don’t realize that I typically purchase most of the tools I feature and use. Every now and then a tool will be provided to me for a review. Affiliate links also help readers and viewers source products they might be interested in. I give my honest opinion and will not promote a product that I won’t use myself.

I am a participant in the Amazon Services LLC Associates, advertising program which are designed to provide a means for sites to earn advertising fees by advertising and linking.  Each affiliate link brings in a small commission on any purchase made through my blog.

Occasionally  I will accept review samples from various companies which are then used for designs in showcase giveaway posts and occasionally the writing of free tutorials and videos.

I only accept products for review if they are potentially useful for my blog readers and video viewers.